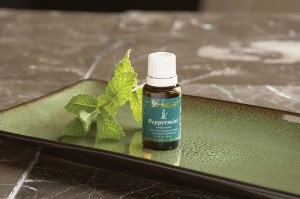 The Essential 7™ is a collection of seven of Young Living’s premiere single oils and oil blends. YL’s Doug Corrigan and Karen Boren are guest bloggers for a series sharing information that will teach you the many ways this kit can enrich life.

DOUG: You mentioned peppermint, Karen, and how it impacts us topically and aromatically.

KAREN: Peppermint is such a fabulous oil. I use it for a number of things. But I was really excited to read one of the studies on peppermint, to learn about the increased mental clarity that it gave people. It significantly helped women who were proofreaders so that they were able to spot misspellings. (Interestingly, lavender was the scent that produced the greatest effects for proofreading in males.) Peppermint also improved performance for participants during typing, memorization, and alphabetizing tests.

DOUG:  It seems that 20 percent of the U.S. population has some kind of acid reflux problem at least once a week. And there are 14.5 million people with ulcers and 3.7 million with gastritis. Peppermint again comes to the rescue. When we take it internally, what happens?

KAREN: One study that discussed that was done at a medical college in Bombay. They found that if people who have dyspepsia (stomachache) from eating too much were given peppermint oil, it would accelerate the gastric emptying rate. Peppermint helped the digestive tract move food through so that the people were comfortable again.

DOUG: Peppermint stops cramping and as a part of a natural cleansing program, it acts two ways. It is antispasmodic, stopping that wrenching feeling of spasms, and it takes care of that bloating and gassy feeling. Peppermint is maybe nature’s top carminative next to ginger. It’s antigas and actually quiets things, dispels gas, and neutralizes it. One thing that keeps occurring to me is that as we are seeking natural solutions, the mainstream’s solution is causing more trouble than it is helping. With digestive problems, they are going at it backwards, trying to block some natural processes in the body.

KAREN: Peppermint is a great, natural solution for stomach upsets. Proton pump inhibitors (as advertised on television) that stop the production of stomach acid have an unexpected adverse effect: pneumonia. A study in the Journal of the American Medical Association showed that of 500,000 Dutch patients surveyed, those taking acid-suppressing drugs had four times the incidence of pneumonia as those who did not take the drugs. Stomach acid kills swallowed germs in addition to digesting your food.