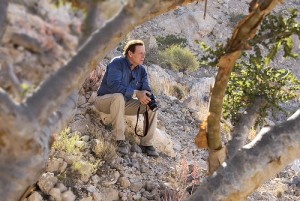 Gary takes a rare moment to rest in Oman

On Saturday, January 15, as I watched Gary coughing so horribly, struggling to breathe with a high fever and intense pain, I started thinking about all the stress and difficulties we put on ourselves for the sake of a cause and a desire to give the world something better. At that moment it didn’t seem like a very good trade.

Ever since we moved to Ecuador five years ago, Gary has been fascinated with the jungle. He loved the discovery of the unknown and was excited about finding new aromatic plants. I knew he was careful about what he ate and drank, but I was always concerned because I knew the jungle was full of attacking critters and infectious dangers.

But Gary was fearless as his unconquerable spirit led him deep into the Amazon without worry for what could be in his path. He always came home with different kinds of bites that usually itched like crazy, but never more than that. I have experienced this with him time and time again!

In Gary’s words: “On Saturday, January 15, I flew home from Idaho, where we had begun our harvest of the balsam fir. I had developed a horrible, gut-wrenching cough; high fever; and extreme fatigue. During the night I had extreme difficulty breathing, and when I was in bed, I felt like I was drowning and had to resort to trying to sleep in the recliner.

“I could tell it was getting worse, so I decided to have Mary take me to the Emergency Room at the American Fork Hospital with the intent of getting oxygen and finding out what was happening to me.”

He received a lot of help, and they were able to open up his lungs a bit so that he could get more oxygen and relieve his pain.

However, they could not find out what was wrong. The tests contradicted each other, came up negative, and left them baffled. The doctor, who we feel was very competent, determined that he had viral bronchitis and double pneumonia. But because Gary had been in the Amazon and in so many other places in the world, they were convinced that some exotic jungle disease was the cause of it all; so the doctor decided to send him to the Infectious Disease Department of the University of Utah Hospital.