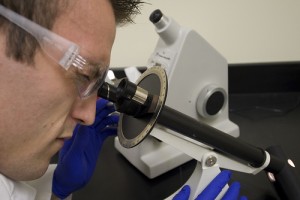 Does your essential oil supplier have the right instruments to differentiate between lavender and lavandin such as this polarimeter that tests for chiral characteristics at the Young Living Spanish Fork, Utah, analytical laboratory?

Where has the focus gone in growing lavender? Looking at the world demand puts more light on the picture. Unfortunately, the decrease in lavender production has moved more growers into the production of lavandin to increase the supply and the profit. It is a simple fragrance solution but not a desirable replacement for therapeutic lavender.

In 1990 the perfume companies combined with cosmetic and hygiene products used up 60 percent of the lavandin production. The industrial use was 20 percent, food and flavoring were 19 percent, and aromatherapy was 1 percent.

In 2005 the perfume and fragrance industry used 56 percent of the lavandin production, industrial use was 18 percent, food and flavoring were 17 percent, and aromatherapy home use was 2.5 percent. The other 6.5 percent went to various commercial entities. Natural medicine use is so miniscule that no one cares to try to determine its usage, which would probably be impossible anyway.  The demand is for fragrance, which can be obtained using lavandin.

Lavandin is easier to grow and yields five to six times more oil. The other amazing thing is that for aromatherapy home use, people are buying lavandin that has been altered with synthetic linalol, which is the lavender fragrance molecule that is often added even during the distillation process and then is put directly into the barrels for export. Adding synthetic linalol to lavandin brings the linalol to the normal percentage expected in Lavandula angustifolia.