EDITOR’S NOTE: Since Gary Young’s passing, we have been taking stock of the tremendous contributions he made to the world by revisiting his presentations, such as this fascinating multipart blogpost series called The Twelve Oils of Ancient Scripture. In it, Gary examined the historical significance and traditional uses of frankincense, sandalwood, myrrh, onycha, spikenard, rose of Sharon, myrtle, hyssop, galbanum, cypress, cedarwood, and cassia. Here are Gary’s remarks on cypress. 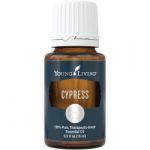 The oil of cypress originated from a tree so durable that the doors of St. Peter’s Cathedral in Rome are made from it and show no signs of decay even after 1,200 years.

The mighty cypress groves of Lebanon were described in the Apocryphal book of Ecclesiasticus as trees which “groweth up to the clouds.”

Some Bible scholars believe that cypress may be the gopher wood used to build Noah’s ark.

Cypress was historically used to support the circulatory system and is mentioned in Isaiah 44:14: “He heweth him down cedars, and taketh the cypress and the oak, which he strengtheneth for himself among the trees of the forest.”

Traditional texts refer to cypress as a decongestant for the lymphatic system and as a support for the nervous system and pancreas. Cypress may have also been used in ancient times for the treatment of pulmonary complaints.

Aren’t these oils enthralling? I can’t wait until next time when I will discuss the rich history of cedarwood!