EDITOR’S NOTE: Since Gary Young’s passing, we have been taking stock of the tremendous contributions he made to the world by revisiting his presentations such as this fascinating multipart blog post series called The Twelve Oils of Ancient Scripture. In it, Gary examined the historical significance and traditional uses of frankincense, sandalwood, myrrh, onycha, spikenard, rose of Sharon, myrtle, hyssop, galbanum, cypress, cedarwood, and cassia.

In this two-parter on frankincense, Gary recounted his experience traveling to southern Arabia to discover the secrets of the frankincense tree. 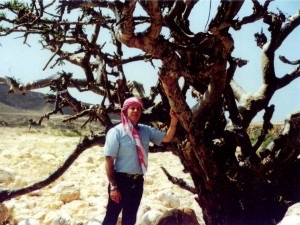 One particular morning I arose from bed in a city called Salalah in southern Arabia. I’ll never forget the excitement that was in my heart as I realized that morning that Mary and I were going to travel into the mountains in eastern Oman to see, to feel, to touch, to experience the magnificence of the greatest storied tree in world history: the frankincense tree.

The excitement grew as I thought about when we would journey into the Empty Quarter to see the city of Ad, now referred to as the lost city of Ubar—the Atlantis of the desert, a city where the trade of frankincense, myrrh, and balsam took place; where fine linens and silks came across the Silk Road from China, Tibet, and India and journeyed all the way into Southern Arabia to trade for the precious ointments and the precious resins of frankincense and myrrh, a commodity that was so treasured that the kings measured their wealth by the volume of this great resin that they possessed. Newborn kings and queens were anointed with the precious oils made from these resins. Why? Why were these such praised and sought-after commodities?

As I stood at the foot of a frankincense tree looking up into the branches, I realized that I was touching a tree that produced a resin that could be distilled into an oil with which the Christ child may have been anointed, an oil that was anciently regarded as being more valuable than gold and one of the most powerful natural healing substances known.

Trader ships from Sri Lanka, India, China, Japan, Egypt, and various ports of the world brought spices, linens, gold, and silver to make the journey to the lost city of Ubar to trade for the precious ointments.

We read in Exodus that these substances were regarded as very special, very sacred elements:

“And the Lord said unto Moses, ‘Take unto thee sweet spices spectate and galbanum, these sweet spices with pure frankincense of each there should be a like weight. And thou shall make it a perfume, a confection after the art of the apothecary, tempered together pure and holy. And thou shall beat some of it very small and put it before the testimony in the tabernacle of the congregation where I will meet with thee. It shall be unto you most holy.’”

Stay tuned for more adventures and education about my travels and the Twelve Oils of Ancient Scripture!