Gary was a pioneer, not only in the way he began the modern-day essential oils movement but also in his modern distillation techniques and naturally sustainable farming of essential oil botanicals. It was, in part, a love of nature that drove him to become that pioneer and innovator and that propelled the growth of the company he started: Young Living Essential Oils.

Gary said: “Learn to appreciate nature, respect it, and love it. If you love nature, you’re not going to do anything to tear it down.” That love of nature and a pioneering spirit became the foundation of his relationships with farmers who also held those values, as illustrated in this video.

Laura Arnod, agricultural projects engineer at our Vida de Seville Partner Distillery in Almaden de la Plata, Spain, said this about the relationship between farming and love of nature: “I believe that agriculture can be part of the solutions for the future,” referring to the way Vida de Seville and Young Living partner to help protect our environment.

Gary first met Ferrando, the farm manager, in 1996, when he and Mary visited Vida de Seville’s frankincense distillery, which had already been in business for almost a century by then. “Gary was fascinated by the extraction of the frankincense oil from the resin, which was very different from the distillation of aromatic plants, and he wanted to understand the process,” said Mary in her book D. Gary Young, The World Leader in Essential Oils (2nd ed.). 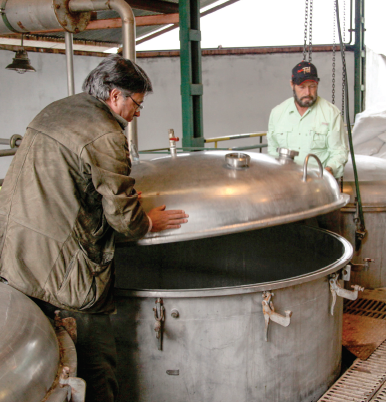 “He became friends with Ferrando, the owner,” Mary continued, “who invited him to come to Spain to see his operation. During the 12 hours of the frankincense resin distillation process, Gary and Fernando talked about the possibility of creating a partnership, which became official when the papers were signed in 2018. Besides frankincense, the oils of Myrrh and Cistus are also produced in this facility. Cistus is wildcrafted and for 42 years, the workers have harvested it in the traditional manner to maintain the integrity of the plants for future growth. They burn the biomass to power the boiler for the distillery, which supports their conservation practices to further sustain the land and produce the highest quality essential oil.”

Watch how they harvest and distill botanicals at the Vida de Seville farm here:

Vince Collins, now owner of the Outback Botanical Reserve and Distillery, didn’t plan on producing essential oils, let alone the unique Blue Cypress essential oil. But he encountered land in Australia on which the rare trees grow in abundance. Eventually and somewhat by accident, he distilled both the bark and needles of some of those trees. It produced an exquisite blue oil. Gary and Mary traveled to Darwin, Australia, to meet Vince in 1997. By then Vince had not only patented the oil but had also been sued by others because of the oil.

Mary says that the relationship they began with Vince was one of the earliest they’d formed, but the blue cypress tree and Vince himself had faced much difficulty before then. “The trees were used for construction, but after a terrible typhoon destroyed so many homes in 1974, the government abandoned the blue cypress plantations because it was obvious that it was more important to build brick-and-mortar houses.”

Vince petitioned the government for a patent for the process of distilling blue cypress trees that was finally granted in 2002. He contacted Gary, and subsequently, Young Living provided the funds for the distillery. Vince began supplying Blue Cypress essential oil to Young Living, and since 2007 the company has worked closely with him. Vince’s Outback Botanical Reserve and Distillery is a proud Seed to Seal® partner farm, adhering tightly to Young Living’s high standards for the oils it produces.

You can see Vince’s story here:

While Gary required high quality and environmental standards from these essential oil producers, he also held high standards for einkorn growers. This ancient grain is farmed and milled in part at our Simiane-la-Rotonde Lavender Farm and Distillery in a town of the same name in France. Nicolas Landel, manager of the farm, describes in the video below how his team rotates the low-maintenance einkorn crops with lavender crops. This cleans and replenishes the soil while also growing a high volume of lavender and bringing einkorn, the original “staff of life” grain, to the world.

“If you hurt the land and the land no longer produces, you don’t survive. They truly believe, if you take care of the land, the land automatically will take care of you,” said Wade Lee, manager of the Kona Sandalwood Reforestation Project, a Young Living partner farm in Big Island, Hawaii.

Gary took care of the land and inspired others to do the same, ensuring not only a bright future for the essential oils he so loved but for the planet as well.

Have you ever been to one of these farms? What did you think? Let us know in the comments!

Tune in every Tuesday and Thursday for more stories about Gary!