Learning How to Do What No One Else Does 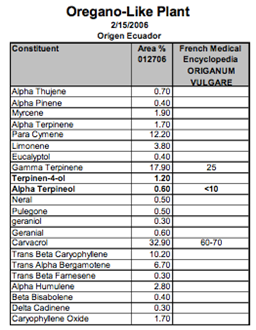 Check out the carvacrol comparison between Young Living’s Ecuadorian Oregano (Plectranthus amboinicus) and Turkish Origanum vulgare. Carvacrol is a “hot” constituent, yet with its lower carvacrol content, Ecuadorian Oregano essential oil works as effectively as the Turkish variety with less possibility for irritation.

I wish you could see that in the back of last week’s research nursery photo, there are two large 6‑foot glass boxes, where we take our seeds that we’re not familiar with. We plant them in the boxes, study them, measure them, and watch the root growth.

We used these glass boxes when we were developing the weed-control formulas so that we could see how the oils affected the weeds. When we’d spray, we could watch to see if it was going down into the roots and killing the roots or if all it was doing was just burning the tops. I say this because the first couple of sprays that I made for weed control in St. Maries just burned the tops of the weeds. The sprays didn’t get down into the roots.

Why did the first weed-control formulas affect just the tops of the weeds? Simply because I wasn’t using surfactants like neem oil and castile soap to hold the spray to the plant so that it could be taken down into the root. So I’d spray the oil, it would burn the tops of the weeds, and then it would flash off. It’s been a learning process because nobody has ever done this before—created an essential oil weed-control formula. Yes, it makes me tired sometimes.

Today’s photo features an oregano comparison of the Ecuador Plectranthus oregano that we developed and a traditional oregano. This is what I was really excited about. Over in the right column is our traditional Turkish oregano. And in the left column is the oregano that we now grow on the farm in Ecuador. This oregano has 21 more compounds than traditional oregano. When you look at the carvacrol content, this is where it gets exciting. Carvacrol is a powerful constituent, yet it can cause discomfort unless diluted.

It was exciting because I always thought I needed to have 60‑plus percent carvacrol in order to be effective for certain applications. Yet I found the “cooler” Ecuadorian oregano to be just as effective!