Requests for a GC-MS Analysis 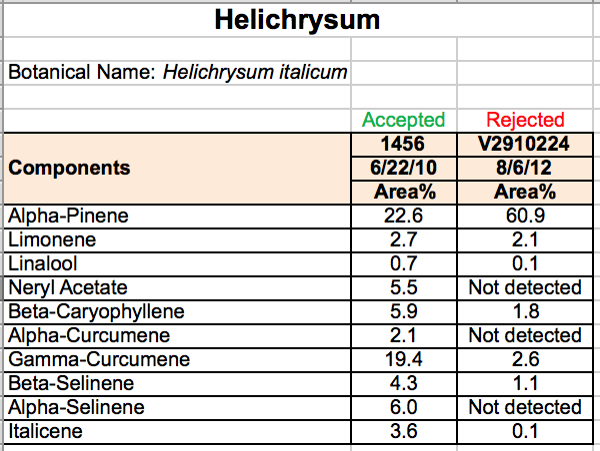 The GC’s program analyzes constituent peaks and then calculates the area under each peak, thus giving an area percent. This is a comparison of peak areas between two different lots of helichrysum from two different vendors. One of them YL accepted for use; the other was rejected.

GC’s. The other day a lady posted me on my Facebook and said, “Well, this other company sends out their GC’s, how come Young Living doesn’t?”

I posted her back and said, “Would you know how to read it if I did?”

Anybody can create anything they want with a GC. What if they spike their oil with a small amount of a strong synthetic chemical and then use only a single 30-meter-column GC? The chemical won’t show up!

So just having a GC printout is meaningless unless you’re an analytical chemist and know how to read it. So why would I waste all the paper just sending them out when no one would even have a clue how to read them? Is there anybody reading this who can look at a GC report and tell me what they’re looking at? I rest my case.

Here is a stark comparison that lists the constituents of two batches of Helichrysum essential oil that were for sale. One was accepted; the other, rejected. Do you know what was interesting? After I rejected the one in red, another company bought it and said it was pure.